Published on August 2016| By Mark NeJame and Vanessa Louise Braeley 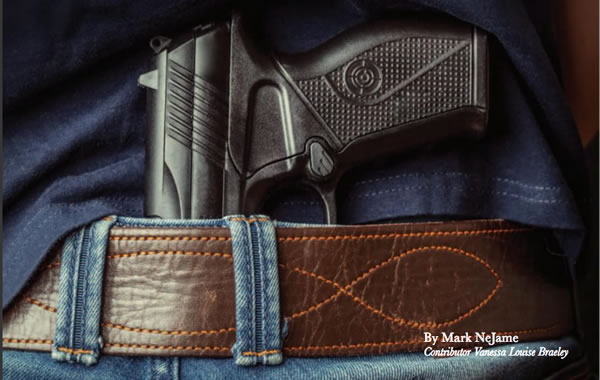 In the wake of the horrific shooting at Orlando nightclub Pulse, countless discussions on gun laws have taken place – and there are many differing opinions on the issue. But underneath the layers of political positions on gun control in this country lies a nuanced issue: how are these guns getting by security?

The weekend of June 10, 2016 was most certainly a tragic one for Orlando. On Friday, June 10, after performing at The Plaza Live in Orlando, singer/performer Christina Grimmie was shot to death by a gun-wielding concert-goer shortly after her show had ended. Early Sunday morning, on June 12, 2016, the two guns used by the shooter in the Orlando nightclub massacre that left 49 dead are high-capacity, quick-reload weapons commonly found in gun stores across the country. The Sig Sauer MCX .223-caliber rifle’s magazine capacity is 30 rounds. The weapon is a semiautomatic rifle, which means each shot requires a separate pull of the trigger. The Glock 17 9mm semi-automatic pistol has a standard magazine capacity of 17 rounds, as the name implies.

In February 2016, two patrons of Glitz Nightclub in Orlando died of fatal gunshot wounds in what appeared to be a gang related incident; many were injured.

The obvious common thread here is that in each one of these scenarios, the assailant was able to carry a gun into a Florida drinking establishment. Florida’s possessory gun laws aside, Florida’s “Concealed Carry” Law specifically bans handguns, concealed weapons and firearms from any establishment which serves alcohol:

“A license issued under this section does not authorize any person to openly carry a handgun or carry a concealed weapon or firearm into: Any portion of an establishment licensed to dispense alcoholic beverages for consumption on the premises, which portion of the establishment is primarily devoted to such purpose.”

Now, enforcement of this law requires a little assistance from the bars, whether it be a pat down, purse search or metal detector, these are simple measures that can be implemented and have a material impact on the safety of the patrons inside. Often times these measures are implemented, but continue to fail. The night of the Glitz shooting, door security claimed to have pat down entrants, there was an off-duty police officer and several bouncers. The Plaza Live searched bags and purses on June 10th. And Pulse had several security officers on hand that fatal night, one of which was a former Marine (Imran Yousuf, one of the many who took heroic measures to save many lives that night). But are these measures enough? How far does one venue have to go in order to protect the safety of its patrons?

There is no requirement that a nightclub, bar or restaurant must pat down, search, sweep and implement metal detectors. However, the venue’s duty to implement security measures often fluctuates with the threat that exists around the community. Florida case law finds that heightened security measures should be imposed in the wake of recent violent crimes, particularly ones such as the recent mass shooting at Pulse, which often encourages copycat crimes (known as the “Copycat Phenomenon”). CNN reports “One killing or shooting increases the chances that others will occur within about two weeks, an “infection” that lasts about 13 days.”

This increased risk coupled with an unfortunate recent history of gun violence, Orlando is on high alert. This could mean metal detectors and serious pat downs for every individual entering a drinking establishment. Nightclub security expert Robert C. Smith of San Diego’s Nightclub Security Consultant and former chairperson of the committee that wrote California’s liquor establishment security curriculum reported to Vice Media, LLC, who conducted an investigation on mass shootings in Florida (https://www.vice.com/read/inside-the-mass-shootingthat-shut-down-a-florida-nightclub) was of the opinion that pat downs are usually inadequate and bouncers are rarely trained. Metal detectors aren’t foolproof, either. “We used to use them, and still do on weekend nights at some venues, but [patrons] were still slipping carbon fiber knives in the clubs,” stated nightclub owner/operator Jeffrey Gitto. Knowing that guns are the key issue, nightlife organizations are working hard with city officials to make Orlando a safer place.

So stay united. Stay focused. Stay supportive of those affected by the recent tragedies, and of the businesses that are working towards rebuilding a safer community. And if you choose to visit one of your local drinking establishments and find yourself subjected to a search before entering, remember the united effort everyone must make in order to rebuild Our City Beautiful. #OrlandoStrong. #OrlandoUnited.