October 27, 1997
By Kenneth A. Harris and Tim Povtak of The Sentinel Staff. Mike Oliver and Sandra Pedicini of the Sentinel staff contributed to this report

NBA All-Star Charles Barkley never backs down. And he never will, the Houston Rockets forward said, offering no apologies about wrestling a man from a police officer's grasp early Sunday and hurling him through a plate-glass window at Phineas Phogg's in Church Street Station. 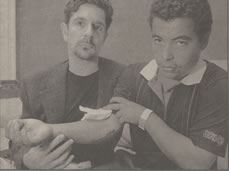 "What they said happened, happened," Barkley said afterward of police and witness accounts. "What he did was inappropriate. I'm going to defend myself. Let there be no debate."

The ruckus at the bar erupted about 2 a.m., when Barkley chased a man witnesses say threw a glass at Karen Carrington of Deltona, who was sitting at Barkley's table. Barkley heaved the man, Jorge Lugo, through a plate-glass window and was arrested.

Lugo, 20, an Orlando construction laborer, was released from Orlando Regional Medical Center after treatment for minor cuts to his upper right arm.

Barkley was charged with aggravated battery, a felony, and resisting arrest without violence. He walked out of the Orange County Jail about 7:15 a.m. Sunday on $6,000 bail after Rockets guard Clyde Drexler, who was with Barkley at the downtown Orlando nightspot, bailed him out.

"It's very unfortunate that it happened," Drexler said. "He certainly was provoked."

Sunday evening, Barkley and the Rockets took the court for an exhibition game against the Orlando Magic, where he was ejected during the fourth quarter for a double technical foul. After arguing with an official, he punched the ball about 30 rows into the stands.

The night before, Barkley had arrived at the bar between 11 and 11:30 p.m. An off-duty officer working at the nightspot, Jeffery Williams, said Barkley had been relaxing and signing autographs.

Carrington said Barkley had tried to avoid a confrontation. She was sitting at a table with Barkley, Drexler and others when it started. She said Barkley ignored Lugo as he shouted curses and threw a cup of ice. She started to confront Lugo, but Barkley persuaded her to ignore him.

"Charles grabbed me. He said, 'Leave it alone. They're just trying to cause problems.' "

But Lugo returned, she said. When he threw a glass, hitting Carrington in the jaw and knocking her off her chair, Barkley got angry, she said.

Carrington, whose face was bruised, was wearing a neck brace later Sunday. She said she watched Barkley run outside and grab Lugo.

"He was fine," she said. "They started putting him in the cuffs. He gave them his wrists. He respected the officers."

Mark NeJame, Orlando lawyer representing Lugo, invited photographers to take pictures of his client but would not allow questions.

"All of a sudden he finds himself being chased and hunted and being literally picked up and thrown through a window like a sack of potatoes, "NeJame said.

NeJame said his client, who is 5 feet 2 inches tall and 110 pounds, has witnesses to corroborate his version of the events.

"He did not throw either ice or the glass," NeJame said. "It's not to say somebody didn't, but it wasn't him. "

The police report said five witnesses, including a bar employee, said they saw Lugo throw the glass at Barkley, hitting the woman in the face.

Orlando police Sgt. Jeff O'Dell said there was no indication alcohol played part in the incident. Officers haven't decided whether to file battery charges against Lugo.

The off-duty officer said he spotted Lugo running toward the front with Barkley in pursuit. The officer grabbed Lugo, with Barkley tugging at Lugo's arm.

The officer said he told Barkley: "Charles, I will handle this. Let go. Charles, let me take care of this. "

Barkley responded: "I will not hurt him. I just want to talk to him." When the officer radioed for assistance, Barkley grabbed Lugo. "I looked up and saw the arrestee holding the victim up in the air by his arms, at which time the arrestee threw the victim into a plate-glass window," the officer wrote.

After Lugo went through the window, "I grabbed the arrestee and pulled him away from the victim, who had slumped to the ground and was bleeding from a laceration on his upper right arm, " the officer said.

Barkley taunted Lugo twice, police reported. The first time, Barkley told Lugo: "You got what you deserve. You don't respect me. I hope you're hurt."

The report said officers pulled Barkley away, but he stepped back and said, "For all I care, you can lay there and die."

Barkley told reporters: "I'm always a target, but I'll never back down. The public does not have a right to do things to you.

" If you bother me, I'm going to whip your ass. The guy threw ice in my face, and I slammed his ass into the window. I'm not denying that. I defended myself. He got what he deserved."