Mark NeJame is truly a modern-day Renaissance man. He is regarded as one of the country's most reputable criminal defense lawyers, and he is also an active member of Mayor Buddy Dyer's Downtown Strategic Transition Team. In his spare time, NeJame keeps his eyes focused on his nightclub and other downtown investment properties, his ears tuned to resurrecting Light Up Orlando, his nose buried in wedding preparations and at least three times a week he puts his head on the floor. Yup. Within two minutes of my shaking his hand, NeJame revealed his yoga capabilities by gracefully demonstrating a headstand on the hardwood floor of his office suite. 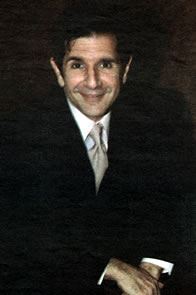 It wasn't easy landing an interview with this man of the moment, either. I began with a 4 p.m. Friday appointment that changed to 1 p.m. That soon changed to 2 p.m., then 3 p.m. and then 3:30 p.m. due to heavy Friday traffic. Once I believed I was safe across the threshold of his office door with his undivided attention, the incessant phone calls commenced. I tried not to eavesdrop, but I couldn't help but overhear him tell Bill Barrett of Inside Edition that his wedding cake will "give some people orgasms." What I'd give to be on that guest list!

Anyway, as the afternoon came to a close, the phone calls slowly ceased and I was able to hear Mark speak about growing up, settling down and counting blessings.

Orlando Leader Have you always lived in Orlando?

Mark NeJame I was born in Orlando and my parents separated when I was a kid. My two sisters and I then lived with my grandmother. We moved to College Park where I attended junior high and high school. I graduated from Edgewater High and went to U of F in 1972.

O.L. Is that where you studied law?

M.N. Yes. I received my undergraduate and law degree there. I also had a small business there, a plant store. We really didn't have much money growing up, no child support from my father. I always worked – I had the biggest paper route in Orlando, and I was a bag boy at Winn Dixie.

O.L. How did that lead to your plant business?

M.N. Well, when I was 22 or 23 I couldn't afford a Mother's Day gift. I learned how to make a terrarium, bought a cactus because I knew It wouldn't die and made my mom a cactus terrarium. Everybody loved it, so I began making cactus terrariums and sold them on consignment to Winn Dixie making $200 a week. After that, I had connections in the plant industry around Apopka and had an idea to start taking plants to Gainesville. I would set up on a street corner and students would buy tons of plants to fill up their apartments. Over time, I made enough money to open my own store.

I try to see the good in everything and everybody because there is an old proverb that says when the game is over the kings and pawns all get put away in the same box.

O.L. How long did you have your business?

O.L. What did you do after law school?

M.N. I came back to Orlando. I knew the only thing I wanted to do was criminal defense, but there weren't a lot of openings in 1980. My first job was with a personal injury firm. I then started with another firm where I met my former partner, Stuart Hyman. I was there for three months; he was there for six weeks and we knew we could do better than this. I was being paid $14,500 a year. We left together and had a phenomenal partnership for fifteen years. Our styles were very different so we had an amicable parting of ways. We remain great friends.

O.L. What happened after you and Hyman parted?

M.N. I worked really hard. I never left the office before 10 or 11 at night for the first 10 or 15 years of my practice. I still had fun, but I was really focused on law.

O.L. Did you roll right into the office from the clubs?

M.N. No, but I didn't need a lot of sleep. I started opening up a lot of businesses. I saw that the nightlife in Orlando was lacking so I opened up different clubs, my first one in 1990. I opened up an upscale sports restaurant, 3-D, with the Magic's Dennis Scott. Then I opened a place called Dechoes. After Dechoes, I opened Zuma Beach, which was the cheesiest club in America.

M.N. I then brought in Howie from the Backstreet Boys as a high-end investor and we opened Tabu. We spent a lot of money turning Tabu into an upscale club, but we got beat hard after September 11th. We've made it more mainstream now.

M.N. Well, for me it is home. My passion is traveling, but this is a wonderful place to come home to. At the moment I am really excited about Buddy Dyer being Mayor. He is open to a lot of positive changes.

O.L. You're on Buddy Dyer's Downtown Strategic Transition Team. Tell me about that.

M.N. There are many steps we are taking to improve downtown. The thing that gets the most attention is that I am working to increase the hours of alcohol consumption to be extended to 3 a.m. on weekdays and 4 a.m. on weekends.

O.L. How long have you been working on this?

M.N. About seven or eight years, but there is a strong support for it now. The DSTT strongly supports this proposal, and Buddy Dyer will probably evaluate it sometime next year.

O.L. How do you believe extended bar hours would benefit downtown Orlando?

M.N. Right now I believe there is a misconception that Orlando is nothing more than Mickey Mouse. We are not a cosmopolitan city and we are not a 24/7 city. I think this is one important element that would show we have grown up. We need retail; we need restaurants. But we also need a vibrant nightlife. We have so much that is coming to Central Florida and we need to be able to make a statement that says we have arrived.

O.L. How do you think other bars outside downtown are going to be affected?

M.N. I think it is a fallacy that they are going to be hurt. Take a look at models in West Palm Beach or Fort Lauderdale where they have counties and cities with districts that have different alcohol consumption times. Other businesses thrive there. This is going to allow a lot of businesses to be successful where before now they haven't been. More people will come to Orlando, they'll spend more money and this will help other businesses survive.

There is a misconception that Orlando is nothing more than Mickey Mouse. We have so much that is coming to Central Florida and we need to be able to make a statement that says we have arrived.

O.L. Have you talked to other downtown bar owners to learn their position on this proposal?

M.N. Yes. There is a new order called DOMA - Downtown Orlando Merchants Authority, chaired by William Waldren, that is in complete support of this.

O.L. I've read that you believe extended hours would cut down on "power drinking".

M.N. Absolutely. What is happening is that thirty percent of our work force in Central Florida is service-oriented. They work in restaurants, bars or other tourist attractions and get off work late. By the time they freshen up and arrive at their destination, they slam drinks for the last hour. If we extend hours, people will go out in waves, leave in waves and end power drinking.

O.L. What about security?

M.N. My proposal is anyone who wants to benefit from staying open later has to pay significant licensing fees.

O.L. So each individual establishment would be financially responsible for security?

M.N. Yeas and this would increase law enforcement and decrease the taxpayer's dollars that would normally pay for more law enforcement in downtown. We could then eliminate taxes for officers because they would be paid by bar owners. This will give us more security downtown than we have now. Officers will have an understanding of the dynamics of what this is about and they will, in a sense, become partners. We would have law enforcement, City Hall and private businesses all working together and that is the best chemistry possible.

O.L. What will be done to improve parking?

M.N. Our recommendation was to figure out how we can bring free parking to downtown, but the ultimate decision is up to City Hall.

O.L. Mark, I see you as the modern day Renaissance man. Your assistant described you as "flavorful" and "eloquent." How would you describe yourself?

M.N. I consider myself a nice guy who works hard and counts his blessings. I have had adversity like anyone, but I believe adversity introduces a person to his or herself. I like to think that everything is a blessing or a lesson. I try to see the good in everything and everyone because there is an old proverb that says when the game is over the kings and the pawns all get put away in the same box. I am a work in progress, but I do the best I can.