After 21 years as a prosecutor, Rick Jancha is defending suspects he might have tried to put behind bars before

Rick Jancha, a veteran federal prosecutor who helped imprison drug traffickers, hit men and other outlaws for two decades, has no shame about his new line of work.

But his 27-year-old son, Daniel -- an assistant state attorney in Volusia County -- loves to remind Dad that he has crossed over to the other side: He has become a defense attorney. 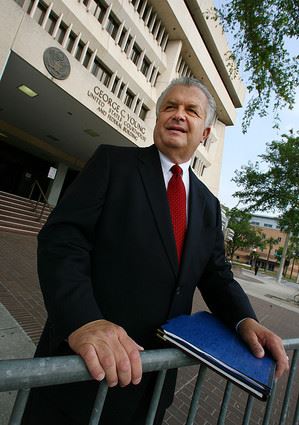 "What's funny is we'll argue about a case because young lawyers are always so zealous," said Rick Jancha, who retired from the U.S. Attorney's Office in Orlando in late January. "He's saying, 'Dad, you need to back off.' I said, 'Life is gray; it's not black and white.' "

"He goes, 'You are just saying that because you are a defense attorney.'I wanted to smack him."

At 55, Jancha is not about to stop working after 21 years with the Justice Department.

Before becoming a federal prosecutor in Indiana in 1986, he was a defense attorney and public defender for nine years. Because of that, he feels at ease in his new role.

"You have to remember you're not on the same side anymore," he said. "Now as a defense attorney, it's my job to try to find the holes in the evidence and come up with issues that benefit the client."

Since arriving in Orlando in 1989, Jancha made a name for himself as a specialist in long-term, complex cases involving wiretaps and electronic surveillance. His skills and zeal made him a target of those he prosecuted.

At a 2004 trial for convicted drug trafficker Charles Montgomery, alias "Fat Charlie," security was beefed up after Montgomery was overheard in jail plotting to escape and kill Jancha.

Jancha also went after Colombian and Mexican drug smugglers; assassins paid by traffickers to kill witnesses and rivals; motorcycle gangs dealing in drugs and explosives; and an assortment of money-laundering suspects.

Between 2002 and 2004, Jancha was tapped by the government to teach international law in Russia, Lithuania, Kosovo and Uzbekistan.

Now, his experience and expertise, observers say, give Jancha an edge.

"If Rick's on the other side, we'll have to make sure everything is just done right," said Assistant U.S. Attorney Robert O'Neill, the Tampa-based chief of the criminal division. "If not, he will definitely take us to task."

"The DEA will miss him, and we look forward to the challenge of him defending some of the DEA's future defendants," Collins said.

In February, Jancha joined the Orlando firm of NeJame, Lafay, Barker and Tumarkin .

Mark NeJame said he and his new partner may not see eye to eye on politics -- NeJame is a Democrat, Jancha a Republican -- but he is "ecstatic" to have him on board.

Already, Jancha has traveled to Tulsa, Okla., in a drug-trafficking case with ties to Florida. Next, he will be in Michigan, New York and Texas.

NeJame, who faced Jancha in courtrooms over the years, said he is assembling a cadre of former federal government attorneys to expand his firm.

The death threats and jailhouse plots of felons wanting to get even with Jancha are over. But some in the same crowd now seek his services.

"All the people that wanted to kill me are wanting to hire me -- that's the funny thing," he said.

One of those is Troy Harkness, a felon-turned-security guard who was convicted last week in federal court of illegally possessing a firearm. It was Jancha's first trial -- and loss -- in his new role.

Harkness was found by police with a Taser stun gun, body armor and a . 380-caliber handgun hidden in his pants last fall.

Jancha said it was "difficult" facing a former colleague, Assistant U.S. Attorney Robert Bodnar. "He [Jancha] made us work hard for that case, considering he [Harkness] had a gun down in his underwear," Bodnar said.

As a prosecutor, Jancha did not hesitate to go after dozens of drug dealers from his home turf of Volusia County. He went after entire families in rural Volusia involved in marijuana and cocaine distribution.

"It just happened that it seemed to be that he got a lot of the cases that we did up in the Volusia area," said Collins of the DEA.

Jancha is not discouraged by his recent loss in court.

"I know how everything works over there," Jancha said of the U.S. Attorney's Office. "Before, I was trying to protect the government from making errors. Now I'm trying to get them to create and make errors."