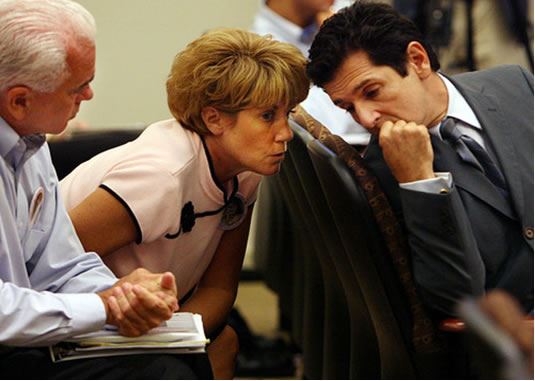 Her attorney, Jose Baez, has already filed a written plea of not guilty on the check fraud charges. That means neither she nor her attorney will appear in court on Oct. 14 and Strickland will set later pre-trial and trial dates.

Those dates will probably be set for the same days as Anthony's other case for child neglect. So far, prosecutors have charged Anthony with 13 counts, including child neglect and check fraud.

FROM THE OCT. 1 EDITION OF THE ORLANDO SENTINEL:

Residents of the subdivision where the family of missing 3-year-old Caylee Marie Anthony lives asked the Orange County Commission for money Tuesday to help them quiet protesters and curious onlookers they say are disrupting the peace.

Since Caylee was reported missing in mid-July, her case has received national media attention. Protesters have gathered outside her family's east Orange County home to heckle the family.

"I will not dignify these miscreants by calling them 'protesters,' " said Mark NeJame, the attorney for Caylee's grandparents, Cindy and George Anthony. "They would not know the Constitution if they threw that against their [the Anthony's] home."

Caylee's grandparents attended the meeting but did not speak.

Karen Wonsetler, an attorney for the homeowners association, said they have few other options. An attempt to restrict protesters to an empty lot collapsed after an Orange-Osceola Circuit Court judge ruled twice that the association failed to adequately notify demonstrators. A vote by association members to pay for additional security fell short.

County Commissioner Tiffany Moore Russell asked the homeowners association to raise its own funds for security.

"I sympathize with these folks, "Moore Russell said of the Anthonys' neighbors. "But it's tough for me to look at my residents and say we'll use taxpayer dollars when I can't do that for my residents who have much bigger crime problems."

The Sheriff's Office has responded to 300 calls for service in the neighborhood and is using off-duty officers paid by the county to patrol the community. The Anthonys have gotten into shoving matches with protesters.

The Anthonys agreed to move their weekly candlelight vigils to a church to avoid attracting visitors, NeJame said. Protesters have been videotaped and may be arrested on battery and other charges, he said.