APOPKA, Fla. -- A man who was 18 at the time he was arrested and charged with threatening to blow up a school has had the charges against him dropped, but his criminal record has yet to be changed three years later.

The pipe bomb threat rocked the community. Scott Davis Jr. was 18 when he was arrested, fingerprinted and charged in 2007. 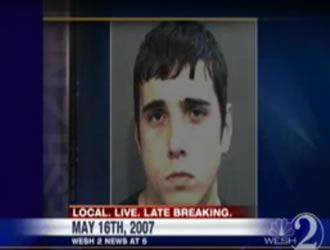 His family is now struggling to clear his name after the real bomb maker was arrested and put in jail.

Davis said the ordeal ruined his reputation and he's still explaining that he has never made pipe bombs or threatened to blow up his school.

Davis said his family was framed when investigators found six pipe bombs in his home and cars. He said the real criminal was family friend Ken Reeves, who planted the bombs after Davis' stepmother shot down his romantic advances.

Reeves was arrested, but Davis said he feels like he's still being punished.

"I've been unable to get a job because of the whole pipe bomb experience that I went through three years ago," he said. "It's still on my record."

Scott moved to Illinois and enlisted in the Army after he got turned down for dozens of jobs.

The case against him still remains on the Orange County Clerk of Court's website.

The State Attorney's Office said the Davis' can get the record sealed, but the family has to start the lengthy process with fees and paperwork. Scott Davis Sr. said he did that last month, but he was rejected.

"Evidently we must have signed in the wrong spot," he said.

Attorney Mark NeJame said it's worth the headache for Davis to get on with his life.

"It sure is not fair. It's another way for the state to make money," NeJame said.