WKMG-Channel 6 has lined up prominent Orlando attorney Mark NeJame as a legal analyst for the Casey Anthony trial. 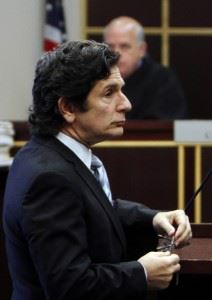 "I respect Tony Pipitone a lot. He is an investigative reporter par excellence," NeJame said. "I think our pairing will help explain what the case is truly about."

NeJame starts Monday on WKMG, and the CBS affiliate will offer a weeklong primer on the case in 7 p.m. newscasts next week. Jury selection in Anthony's case begins May 9. She is charged with first-degree murder in the death of her daughter, Caylee.

WKMG news director Steve Hyvonen said it was a coup to land NeJame. "He's one of the most well-known attorneys in Central Florida and he's nationally recognized," he said.

NeJame said he also will be a regular on Nancy Grace's HLN show during the trial. NeJame is familiar with the case, because he represented George and Cindy Anthony, Casey's parents, for a while. NeJame also has represented Texas EquuSearch, which searched for Caylee.

"The loss of this child got to me," NeJame said. "I'm a father with young children approximately the same age as Caylee. What's really disturbed me is so much of what's out there is garbage, and it's wildly speculative. The Internet has helped fuel speculation. I want to help to get the truth out."

NeJame will be a WKMG analyst along with attorney Mark O'Mara. Hyvonen said the attorneys will appear separately and together during newscasts