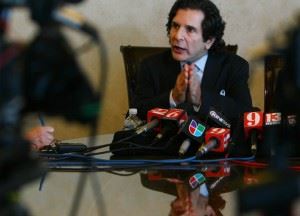 NBC's "Today" provided an update this morning: Parker's 3-year-old twins have been taken away from their father, Dale Smith. He has been identified as the primary suspect in Parker's disappearance. Parker's mother is caring for the children.

Prominent Orlando attorney Mark NeJame, Smith's attorney, told NBC's Matt Lauer that protective services gave no reason for taking the children. In what NBC billed as an exclusive, NeJame dismissed reports that Smith was the last person to see Parker.

"He's not the last person to see her," NeJame said. "We know from a timed video from a neighbor that she pulled into his place at 3:18 that afternoon. At 4:30, he was at his father's place. If you run a timeline on this, it's physically impossible for him to have done what is being suggested. In an hour and 12 minutes, he was supposed to, with the children present, have met her, killed her, disposed of the body, gone clear across the town, dropped off one vehicle, scraped off all the lettering on the vehicle, brought the vehicle back and then ended up at his parents."

Police have given no specifics about why Smith is the main suspect, NeJame said. "To our knowledge, there is no evidence other than conjecture and speculation," NeJame said. "You have this basic reason because he refuses to take a polygraph, which most people should not take polygraphs. They're not even reliable, not one court in the country accepts them as reliable."

NeJame provided a theory about why polygraphs have gained stature in the culture.

"We've watched so much trash TV thinking that polygraphs are the end-all and be-all of whether somebody is telling the truth or not," NeJame said.

Fellow attorney Rajan Joshi said Smith had cooperated with authorities in the beginning but not now. "It seems his cooperation actually is working against him," Joshi said.

Smith was dishonorably discharged from the military and has convictions for drug possession and domestic violence, Lauer noted.

Despite troubles in his past, Smith has turned his life around by working hard and paying child support, Joshi said. "He's been a wonderful father to the children," Joshi said.