SANFORD, Fla. - A tall, lanky red-headed lawyer named Mark O'Mara appeared in court here on Thursday, standing next to his newest client, George Zimmerman, one of the most recognizable defendants in the country but a man he had met for the first time only the night before at the county jail. 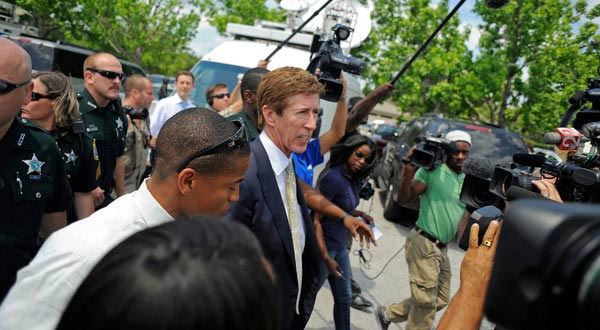 Mr. Zimmerman, 28, has become known to millions as the neighborhood watch organizer who shot and killed Trayvon Martin, an unarmed black teenager, six weeks ago, but who was initially not charged with any crime - unleashing a nationwide protest.

Mr. O'Mara, a New Yorker by birth and a criminal defense lawyer for nearly three decades, is perhaps best known in central Florida as a low-key legal analyst on television who frequently commented on the trial last year of Casey Anthony, who was accused - and acquitted - of killing her young daughter.

It was Mr. Zimmerman's first moment in court, and he looked wide-eyed and grim in a one-piece blue-gray prison uniform, a couple of day's growth on his face. Mr. O'Mara said that his client would plead not guilty and that he would try to get him out of jail within the next couple of weeks. Until then, Mr. Zimmerman, who was charged with second-degree murder on Wednesday, is being held in protective custody. A conviction could result in a prison term of 25 years to life.

After seeing his client on Thursday, Mr. O'Mara said in an interview that Mr. Zimmerman was distraught. "He is stressed and tired after long weeks of not being able to go out in public," Mr. O'Mara, 56, said. "In the best of circumstances, he was dealing with the reality that he caused the death of somebody, and that weighs on you."

Saying his client has no money, Mr. O'Mara said that he was not charging Mr. Zimmerman and that he hoped to secure a low bond.

Mr. Zimmerman and his family have maintained that he was trailing Mr. Martin because the young man appeared suspicious. Mr. Martin then disappeared from view, only to re-emerge, confront him and assault him, they say. In the fight, they contend, he shot Mr. Martin in self-defense. Florida's expansive self-defense law, Stand Your Ground, was cited initially as a reason why no charges were brought.

In a four-page charging affidavit filed in court on Thursday, prosecutors added little to the known facts in the case. But the affidavit contradicted the Zimmerman family account in at least one crucial respect.

"Martin attempted to run home," it said, "but was followed by Zimmerman who didn't want the person he falsely assumed was going to commit a crime to get away before the police arrived."

Mr. O'Mara said self-defense cases were not new to him; he said that he had handled dozens, but that none had gone to trial as Stand Your Ground cases. He has also tried high-profile death-penalty cases.

He said that self-defense would probably be a "facet" of Mr. Zimmerman's defense. Last month, Mr. O'Mara told a local television station that Mr. Martin's shooting could be legally justified under the law, which allows people to use deadly force if they feel endangered. "Other people call it the license to murder statute because it doesn't require actions to avoid the confrontation," Mr. O'Mara said in the appearance.

He was critical of the law on Wednesday, however, saying it has "some troublesome portions to it." But, he added, "right now it's the law of Florida and that will have an impact on this case."

Mr. O'Mara, who grew up in Rosedale, Queens, the son of a battalion chief in the New York City Fire Department, came to this case suddenly, after another well-known lawyer, Mark NeJame, referred him and four other lawyers. Mr. NeJame, who said Mr. Zimmerman had consented to his speaking, declined a March 13 request by Mr. Zimmerman to take his case because it would have required too much time away from his family.

On Tuesday, Mr. Zimmerman's original two lawyers held a news conference to resign, saying that they could not get in touch with Mr. Zimmerman and that he was acting "erratic." Mr. NeJame got a call a day later from a close family friend of the Zimmermans. He gave the friend a list of the five lawyers; they chose Mr. O'Mara.

"I thought Mark had strong attributes like being compassionate, extremely smart, media savvy and very professional," Mr. NeJame said. "Mark has a measured approach and by bringing him in, it would help keep unbridled passions contained."

The Martin family expressed relief on Thursday over the charges. Exhausted by the ordeal, Mr. Martin's mother, Sybrina Fulton, said she had misspoken on a news program earlier in the day when she used the word "accident" to describe the shooting. It was not the shooting that was the accident, she said; it was the encounter between Mr. Martin and Mr. Zimmerman. "The accident came when Zimmerman exited his vehicle and they met," she said.

Asked whether he would use her words in court, Mr. O'Mara displayed his flair for discretion. "They went through a horrible tragedy," he said. "They lost their son. We're not going to be talking about using words against the mother of a deceased child."