Andrew Scott was killed on July 15. The 26-year-old heard banging on his door very early in the morning and he answered with a gun in his hand, according to officials. That's when a deputy shot him.

Part of the terrible tragedy is that Scott was not the one deputies were looking for that night.

Scott's family wants the sheriff's office to change its policies and pay damages.

"We are simply going to move forward with a major lawsuit against the sheriff's office for the handling of this case," said defense attorney Mark NeJame. 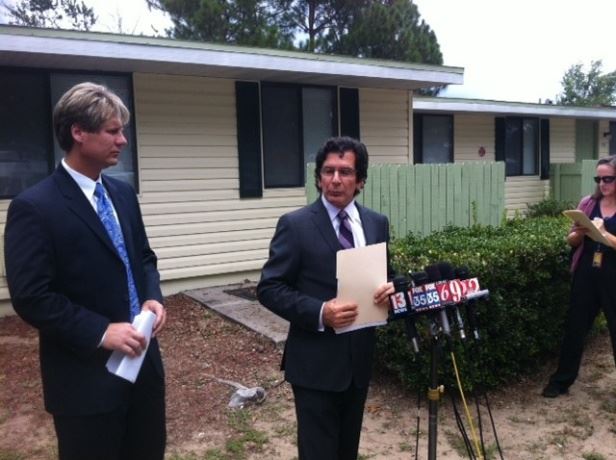 NeJame, who's representing Scott's family in the lawsuit, said deputies broke the law when they banged on Scott's door at 1:30 a.m. and did not announce they were law enforcement. He cited both a state and U.S. Supreme Court case that say law enforcement must announce themselves when they knock.

"This death was brought about because the law was not followed and this sheriff has arrogantly announced he is not going continue to follow the law," said NeJame.

Lake County Sheriff Gary Borders stands by his deputies' actions that night saying they have a right to make the tactical decision not to announce themselves.

NeJame also suggests the sheriff's office lied when it said Scott opened the door and pointed a gun at their faces. He said his investigation indicates five bullet holes in the door, all entering at an angle that wouldn't be possible if the door were wide open.

"Here it's clear to see that they entered at right angles and the door was not open," said NeJame.

The Sheriff's Office only response Monday to this lawsuit was an emailed statement in which they said they are awaiting the outcome of the Florida Department of Law Enforcement investigation and will not comment on any pending litigation.

They also said their thoughts and prayers are with the Scott family.