The mother and girlfriend of a Leesburg man shot and killed by a Lake County sheriff's deputy last month, sobbed in each other's arms as they broke their silence Monday and spoke publicly about the tragedy. 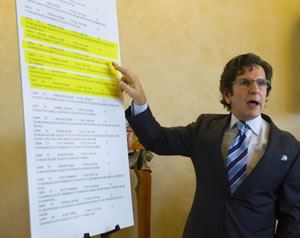 "My beautiful, innocent son was my sunshine," Amy Young said of Andrew Lee Scott, 26, who was shot to death at 1:30 a.m. on July 15 when deputies went to the wrong apartment in seeking a battery suspect.

The mother's voice trembled as she spoke to the media at the Orlando law office of Mark NeJame on the eve of Florida's primary election, where Lake County Sheriff Gary Borders is being challenged by Sandy Carpenter.

Sitting next to Young was her son's girlfriend, Miranda Mauck, 20, while several other family members and friends stood behind them.

"I am heartbroken over the loss of my sunshine. I cry every day and my grief is overwhelming. Andrew was a wonderful son," Young said. "We loved each other deeply and I miss him more than words can say. Andrew was a gentle giant. He was always there for his Momma and the people who loved him. .... I continue to be in disbelief that my precious son was stolen from me. His murder was unjustified."

Young said through the on-going investigation of what happened to her son, she has learned that proper police training, policies and practices were not followed.

"I believe that Sheriff Gary Borders' poor management and policies are responsible for the death of my precious son, Andrew," she said, upset that LCSO deputies did not announce their presence when they banged on her son's apartment door and fired multiple gunshots that killed Scott.

According to the sheriff's office, Lake deputies were assisting the Leesburg police in the search for a Leesburg man thought to have been involved in an assault. The deputies spotted what they believed was the suspect's motorcycle in front of Scott's apartment, went to the home and knocked on the door without announcing themselves. Sheriff's officials said Scott opened the door with a gun pointed at deputies and K-9 deputy Richard Sylvester shot and killed the 26-year-old.

"I don't want another mother to have to go through what I'm going through right now," Young said. "I ask y'all, who wouldn't go to their door armed when some stranger, who doesn't identify himself is pounding on the front door at 1:30 in the morning? That's all Andrew did. He was gunned down in his own home in front of his beautiful girlfriend, Miranda, who he was trying to have a baby with and planned to marry as soon as they worked out the details. All Andrew was trying to do was protect his home and the future mother of his children."

Young said what happened to her son could happen to anyone living in Lake County.

She said she is hurt to have not received an apology from the sheriff.

"Not once has Sheriff Borders offered an apology to me or my family for murdering my precious son. Not even a simple, 'sorry for your loss,'" she said. "And the stories from the sheriff's office have flip-flopped over and over ... What are they covering up? I want to know. What mother wouldn't want to know?"

Young said she believes LCSO has been unprofessional, insensitive, illegal and arrogant in attitude and policies in her son's death.

"I will not allow Sheriff's Borders' good ol' boy system or his office to sweep my son's murder under the rug," she said. "I demand justice for my son. God forbid another mother has to ever go through this pain."

Miranda Mauck said Scott was the man she was planning to marry. She was with him in the apartment on the night that he was killed.

"We were happy together and I expected to spend the rest of my life with him, as we talked of marriage often," she said. "I was with Drew, cuddling on our couch together, at 1:30 in the morning on Sunday, July 15, when my life changed forever and Drew's ended. There was a frightening and unexpected pounding on the door of our apartment. ... The couch was only a few feet away from the door. We immediately jumped up, startled, and we went to our bedroom, which was only several steps away. A very few short moments later, another set of loud bangings was heard on the door. Frightened and concerned not only for me but for himself, he grabbed the gun which was located inside our bedroom. We weren't expecting anyone and no one announced themselves."

Mauck said she and Scott were frightened by the noise.

"Two such loud, unexpected bangings on the door at 1:30 in the morning scared us," she said. "Drew went ahead of me from the bedroom and I followed, but stayed a few feet behind and he walked to the door. He opened the door slightly with his right hand and he held the gun in his left (hand). The door was only opened a little bit so he could see who was outside. Almost immediately a hail of gunfire started. Drew never aimed his gun or shot at anyone. He was struck and fell on our couch."

Mauck said a bullet went over her head and other bullets riddled the 475-square-foot apartment, destroying keepsakes and several belongings, including the television.

"Drew died in front of me, killed by the gunfire," Mauck sobbed. "One could not see who was outside, or know that the deputies were pounding on the door, because the deputies never identified themselves, and they were hiding to the side of the door, where there was no peephole in our door and there was no outside lighting."

Mauck believes there have been "misrepresentations" presented by Borders and his department about the shooting.

"I believe it's a cover-up to what truly happened," she said. "They killed Drew. I was there. Drew was an innocent man who did nothing wrong. It's disgraceful that Sheriff Borders and his department are trying to avoid the consequences to their actions, especially when they expect the rest of us to do so."

Mauck said she and Scott loved each other dearly.

"He died protecting me," she said of the pizza delivery man she first met while they were working together. "Drew love me and died for me, making the ultimate sacrifice while trying to protect me. ... Drew, an innocent man, died not because he wasn't following the law, but because Sheriff Borders' policies and his deputies did not follow the law."

Leo Young, the stepfather of Andrew Scott, also blames LCSO for their actions in the shooting.

"The whole department needs to be cleaned out and re-evaluated," he said.

Lt. John Herrell said Monday that members of the Lake County Sheriff's Office do follow the laws that govern their actions in the course of carrying out their lawful duties and objectives.

"There is no statute or court ruling that requires law enforcement officers to announce and identify themselves when they have no intention of entering a home," Herrell said. "The deputies involved in this incident had no intentions whatsoever of entering Mr. Scott's apartment as they were only knocking in an effort to locate (battery suspect) Jonathan Brown."

During an Aug. 6 press conference, NeJame announced a lawsuit was pending and he highlighted federal and state statues that dictate and require that that there is absolutely no discretion permitted on a knock unannounced.

"The law is very clear," NeJame said, citing State vs. Cable: "You knock and you announce your presence so that innocent people will not be killed ... The law forbids the law enforcement officers of the state or the United States to enter before knocking at the door, giving his name and the purpose of his call. That was not done here. So, the law was simply not followed by law enforcement, of the protectors of the law, and if anyone is supposed to be following the law, it is law enforcement. They failed to do so."

NeJame said in the case of "There is nothing more terrifying to the occupants than to be suddenly confronted in the privacy of their home by a police officer decorated with guns and the insignia of his office. This is why the law protects its entrance so rigidly."

Herrell said Sylvester, who shot and killed Scott, remains on leave from regular-duty status pending the outcome of the Florida Department of Law Enforcement's investigation.

"In the meantime, he is only being allowed to train with his K-9 in an effort to keep the dog up-to-date with its training," Herrell said.

"Holding the press conference one day prior to election day raises obvious questions about the motive behind the scheduling," Herrell said. "If this unfortunate situation is being used to benefit a political campaign, then shame on the person responsible."

Herrell added: "Our thoughts and prayers remain with the friends and family of Mr. Scott, as well as with the deputies involved."

NeJame said the election is "irrelevant" and that it's important for those involved in the shooting to take ownership of what has happened as the family continues to grieve and the investigation remains on-going in efforts to achieve justice.

"Just because there's an election, you don't get a free pass," the attorney said.