Proceeds to Benefit Runway to Hope

Angelo Ballestero Jr. had the kind of wild red hair that made you notice him across a room. He had a sweet smile and quirky sense of humor, and even when the Eustis boy developed bone cancer at age 13 — undergoing long rounds of chemotherapy and the partial amputation of his left leg — he had composure and faith that the adults in his life could only envy.

“He kept telling us not to be afraid,” said his aunt, Virginia Ann Rodriguez. “They buried him not far from my house, and I think about him all the time.”

For four years, the grief over Angelo sat like a weight on her heart. Then she decided to do something.

Rodriguez, 57, owns Gianni Vincent Jewellers in Windermere. She didn’t know a lot about charitable fundraising. But she did know about jewels.

So in Angelo’s memory, she designed “The Hope Tiara” — $200,000 worth of white gold, rubies, and 80 carats of diamonds that’s now on a tour of Central Florida galas and events to raise money for a local pediatric cancer charity, Runway to Hope. Nearly all of the fees for its rental and use for portraits are donated to the nonprofit.

The tiara made its debut last week at Lake Highland Preparatory School in Orlando, where it crowned the homecoming queen and was the center of a lunchtime fundraiser by students who chipped in a few dollars each to take selfies wearing it. Both times, it came with a security guard in tow.

“It is stunning. I feel like a princess in it,” said junior Helen Hutchinson, 16, who posed for photos while she and her boyfriend took turns trying it on. “I know it has a deep meaning.”

Hutchinson, who knows Rodriguez through her family, was the one to suggest bringing the piece to her school, where she launched the Hope Tiara Club to help promote it and honor Angelo. She never met the boy — he died in February 2014 — but she has some sense of the loss.

The tiara, though, was not intended to evoke sadness. Instead, Rodriguez said, it was designed for joy and fun — “something very unlike cancer.” And amid the Lake Highland students, there was more levity than awe.

The kids practiced mock princess waves and Meghan Markle impressions, and dean and football coach Mick Davis agreed to a brief pose, the tiara atop his crew cut after students plunked down a donation in his name.

“If I see this on the internet, you’re all going down,” he bluffed as his players snickered. 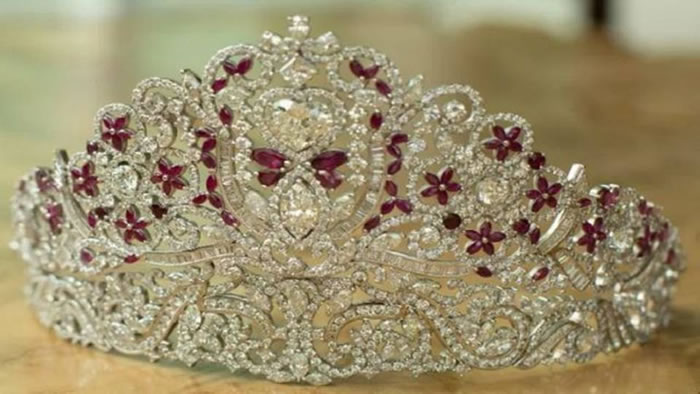 The jewels he sported were actually a stripped-down version of the piece, which can be separated into two, smaller tiaras. Some of the larger clusters of jewels are also replaceable for occasions when having a $200,000 temptation out in public is too risky.

“The bottom portion is perfect for a bride to rent. The top is perfect for a quinceañera,” Rodriguez said. “But when you’re renting the full tiara, the rental cost comes with a security detail.”

Ninety percent of the $1,500 to $5,000 fee goes to Runway to Hope, with the rest covering insurance and cleaning. All of the money donated to take a selfie with the tiara — either at the jewelers or one of the upcoming stops on the tiara’s tour — goes to the charity too.

The tiara’s rental also will be auctioned off for other local causes, including at the Oct. 20 Famous Faces Masquerade Ball for Shepherd’s Hope and the Oct. 27 JDRF Imagine Gala for juvenile diabetes research.

“It’s a beautiful thing that she and her company are doing to honor her nephew,” said Orlando attorney Mark NeJame, who founded Runway to Hope with his wife Josie. “We’ve had such an outpouring of love from the community, and it’s remarkable to see people like her coming forward.”

And should someone want to buy the tiara at its full $200,000 value, all of the proceeds from the sale would go to the charity too, Rodriguez said.

“Who knows what the future holds for this?” she said. “When I did this, I didn’t know if people would think it was crazy. I just know that I love my nephew, and I love the chance to keep saying his name.”

[For more information on the tiara, go to giannivincentjewelers.com.]