ORLANDO, Fla. - Former Jacksonville Jaguars and University of Central Florida wide receiver Mike Sims-Walker is accused of sucker punching a man in downtown Orlando on April 14, according to an affidavit for an arrest warrant filed in Orange County. 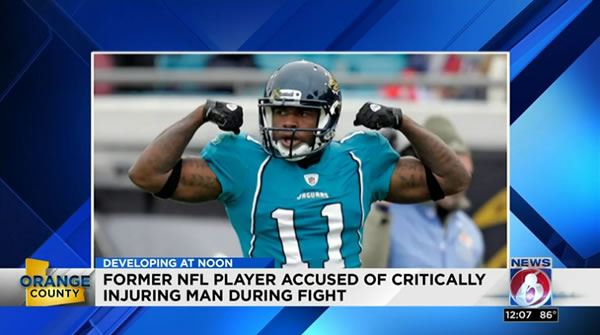 Sims-Walker, who attended Edgewater High School in Orlando, is facing a charge of battery with great bodily harm, a third-degree felony.

The Orlando Police Department said the incident happened around 2:30 a.m. outside the Tier Nightclub on East Central Boulevard and the victim, identified as Mason Graham, was knocked unconscious and rushed to Orlando Regional Medical Center in critical condition.

Graham suffered a traumatic brain injury and is now recovering at home, said his attorney, Mark Cressman. Graham's parents said their son suffered a fractured skull and bleeding of the brain and was on a breathing tube, according to the affidavit.

"The punch to Mr. Graham came from Graham’s blind spot and upon being hit -- if you see the video -- he immediately went down," Cressman said. "He had no idea who the individual was."

Cressman said he and the Graham family are weighing their options going forward, and it's not known if they will file a civil lawsuit against Sims-Walker.

"Whether you're a professional athlete (or) no matter who you are, when you’re out in public, you should conduct yourself accordingly and you don’t go around punching people," Cressman said.

Investigators said they received a Crimeline tip the day after the incident that identified the suspect as Sims-Walker.

During the investigation, police obtained cellphone video from a witness and surveillance video from inside Tier that showed a man resembling Sims-Walker leaving the club 13 minutes before the incident outside.

Police said cell data from Sims-Walker's phone also matched the area and time of the incident.

The affidavit also said the man resembling Sims-Walker was at the club with three others, including Brandon Siler, a former NFL and Florida Gators linebacker who played with the San Diego Chargers and Kansas City Chiefs. Siler attended Evans High School in Orlando.

According to a review of social media accounts conducted by Orlando police, the incident occurred the same day as Siler’s “wedding anniversary party” in Montverde.

Police said that, in an effort to reach Sims-Walker, detectives called his mother, who said he lives in Georgia. She gave police his phone number, but Sims-Walker never returned their calls, according to the affidavit.

Sims-Walker’s defense attorney, Eric Barker, of NeJame Law, called the detective the next day asking why his client was being contacted. Police briefed him about the incident and arrangements were made for Sims-Walker to turn himself in to authorities, the affidavit stated.

Sims-Walker posted bond and was released, according to court documents.