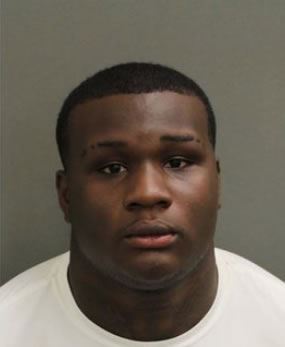 UCF redshirt freshman Raymond Cutts was arrested Monday by the Orlando Police Department and charged with carrying a concealed firearm and grand theft in the third degree, according to an Orange County Clerk of Court records search.

UPDATE 5/6 9:00 PM: Knights247 spoke with Eric Barker, a criminal defense attorney partner for NeJame Law in Orlando, who described the probable cause that led to Cutts' arrest as "pretty weak." According to the arrest affidavit, Cutts was already listed as the suspect when the firearm was reportedly stolen on April 29 and then was charged with grand theft in the third degree once the firearm was found in the car.

"I would assume whoever stole it, sold it immediately," Barker said over the phone. "For a person who has it five days later, it could have changed hands two or three times, but I would assume it changed hands at least once. If you steal an item that's traceable, you certainly don't want to be in possession of it so I would assume most people would steal stuff like that so they can sell it. I don't think being in possession of the gun five days later is really much that evidence that he took it."

The question is, why didn't Orlando Police go out and arrest Cutts if he was a suspect? Barker, who was admitted to the Florida Bar in 1992, said he believes police potentially did not have enough evidence prior to the traffic stop where the gun was to make an arrest.

"So even though he's a suspect, they need enough evidence to have probable cause to make the arrest," Barker said. "I'm guessing at that point they just didn't quite have enough to get a warrant for an arrest or anything."

Barker, who is recognized by the National Trial Lawyers Association as a Top 100 Trial Lawyer, explained while jurors can use the information to conclude that Cutts did, in fact, steal the firearm solely because he was in possession of said stolen firearm, that's not always the case.

"Other factors will come into play such as how long it was between the stolen item and when the person was in possession of it," Barker said. "For something that is easily transferable, the longer it is, then the likely it is the state can prove that the person stole it just because they were in possession of it."

While Eric Barker believes the probable cause to arrest Cutts over the stolen firearm is not strong, he explained the concealing of the firearm is different.

"Him stealing the gun is pretty weak, him concealing it, the only evidence they have of that is his cousin's statement," Barker said. "If all three people had said 'I don't want to talk to you,' and the officer had no other information, I don't think he would have been able to make any arrests."

So what happens next? Barker believes it really depends on why Cutts was already viewed as a suspect for the stolen firearm.

"As far as the theft is concerned it's hard to say because I don't know why he was a suspect, to begin with," Barker said. "Does he have fingerprints or DNA in the store? Is he on video surveillance somewhere? Because they didn't have probable cause to make an arrest, to begin with, I'd have to assume that the evidence they have against him, as far as the theft, is fairly weak and I don't think this new piece of evidence really adds much. But again, it's hard to say in a vacuum without knowing what they already had."

As for the driver who left the scene with only a citation, according to the arrest affidavit, Barker explained that's common nowadays for an arrest not to be made in large due to the COVID-19 pandemic.

"That's actually somewhat common, especially now, they're trying to take [fewer] people to jail than put them in that environment with the COVID," Eric Barker said. "Even before that, it wasn't uncommon to just give someone a ticket and to release them, assuming of course that there's someone else that could drive the car, someone that could pick up the car. You don't want to just let the kid go and drive his car home if he doesn't have a license. That didn't seem to me to be out of the ordinary."