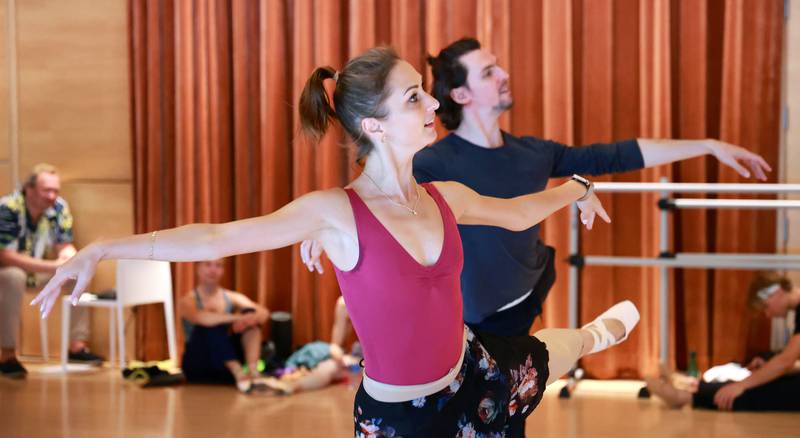 Members of the National Ballet of Ukraine rehearse backstage at the Dr. Phillips Center for the Performing Arts in Orlando, Thursday, August 25, 2022. The dancers will perform in a sold-out benefit for Ukrainian charities on Saturday night. (Joe Burbank/Orlando Sentinel)

Marc McMurrin saw the news of Russia’s invasion of Ukraine and wanted to help. So did Alan Ginsburg. So did Sibille Pritchard. So did everyone they asked.

The result? A sold-out benefit for Ukraine-supporting charities that already has raised about $400,000.

Saturday night, the Dr. Phillips Center for the Performing Arts will host the National Ballet of Ukraine for a performance in which 100% of ticket sales help the people of the war-torn country. It didn’t surprise Pritchard that tickets sold like lightning. 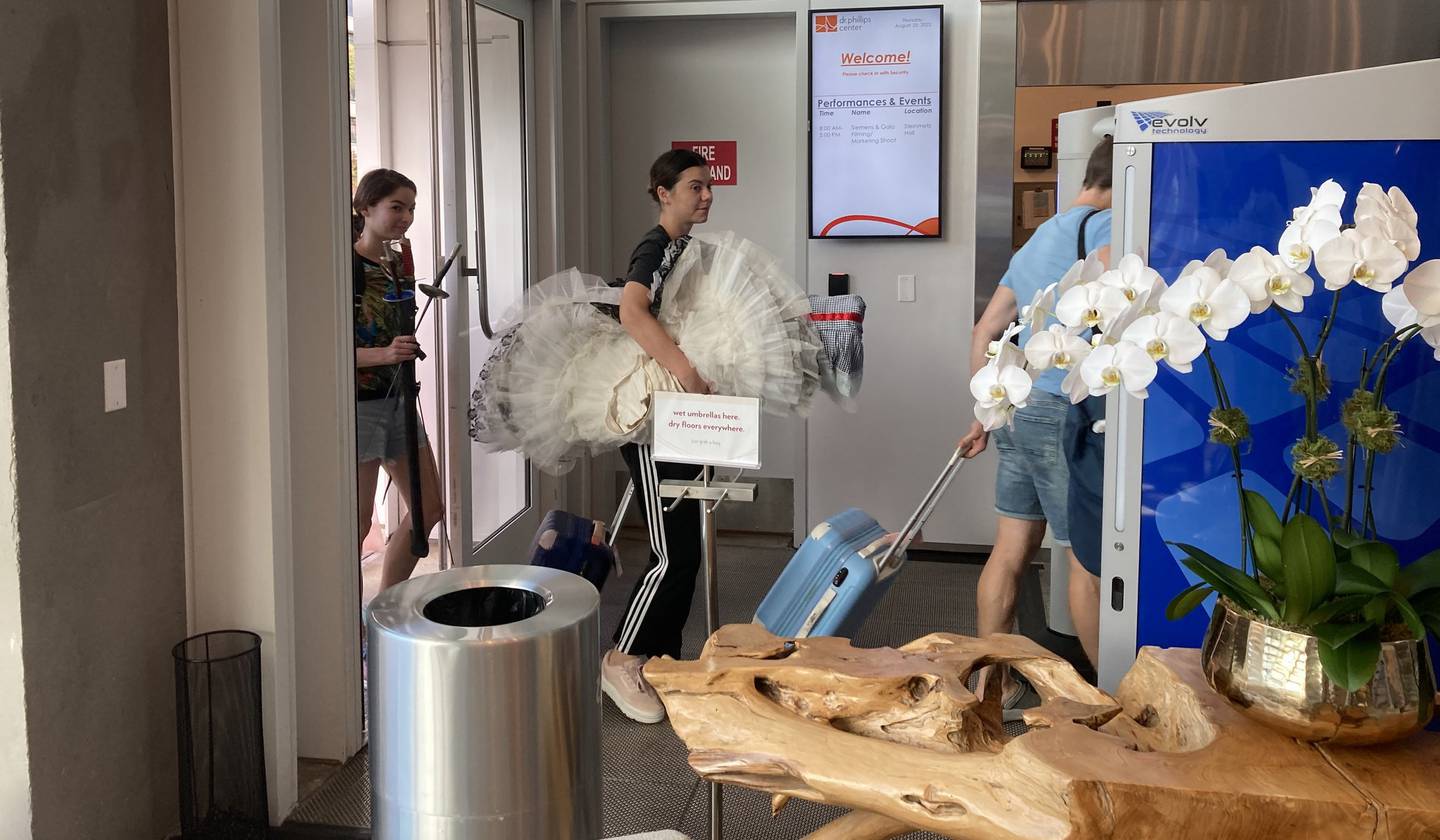 Personnel with the National Ballet of Ukraine arrive at the Dr. Phillips Center for the Performing Arts in downtown Orlando to rehears on Thursday morning, Aug. 25, 2022. (Matthew J. Palm / Orlando Sentinel)

“Everyone was watching the situation and thinking, ‘If I could do something for Ukraine, I would. But what?’” said Pritchard, vice chair of the downtown Orlando arts center’s board of directors. “This was something they could do.”

The willingness to help extended beyond ticket buyers. The performance also will feature the Orlando Philharmonic Orchestra and singers from the Bach Festival Choir, Opera Orlando and Opera del Sol.

Orlando Ballet also provided support, including rehearsal space, costumes, additional dancers and about $1,000 worth of toe shoes, according to spokeswoman Sara Brady.

“What made this extra special is that artistic director Jorden Morris had worked with two of the Ukrainian dancers before so they had a relationship with the company when they got here,” she said.

Some, like the singers, donated their time. Orlando Ballet provided its services free of charge. The Philharmonic raised money so the 56 musicians could be paid.

“I knew I was asking for a lot,” said McMurrin, president of the Ginsburg Family Foundation, and the man who spearheaded the benefit. “But the outpouring from the community … it gets me emotional.” 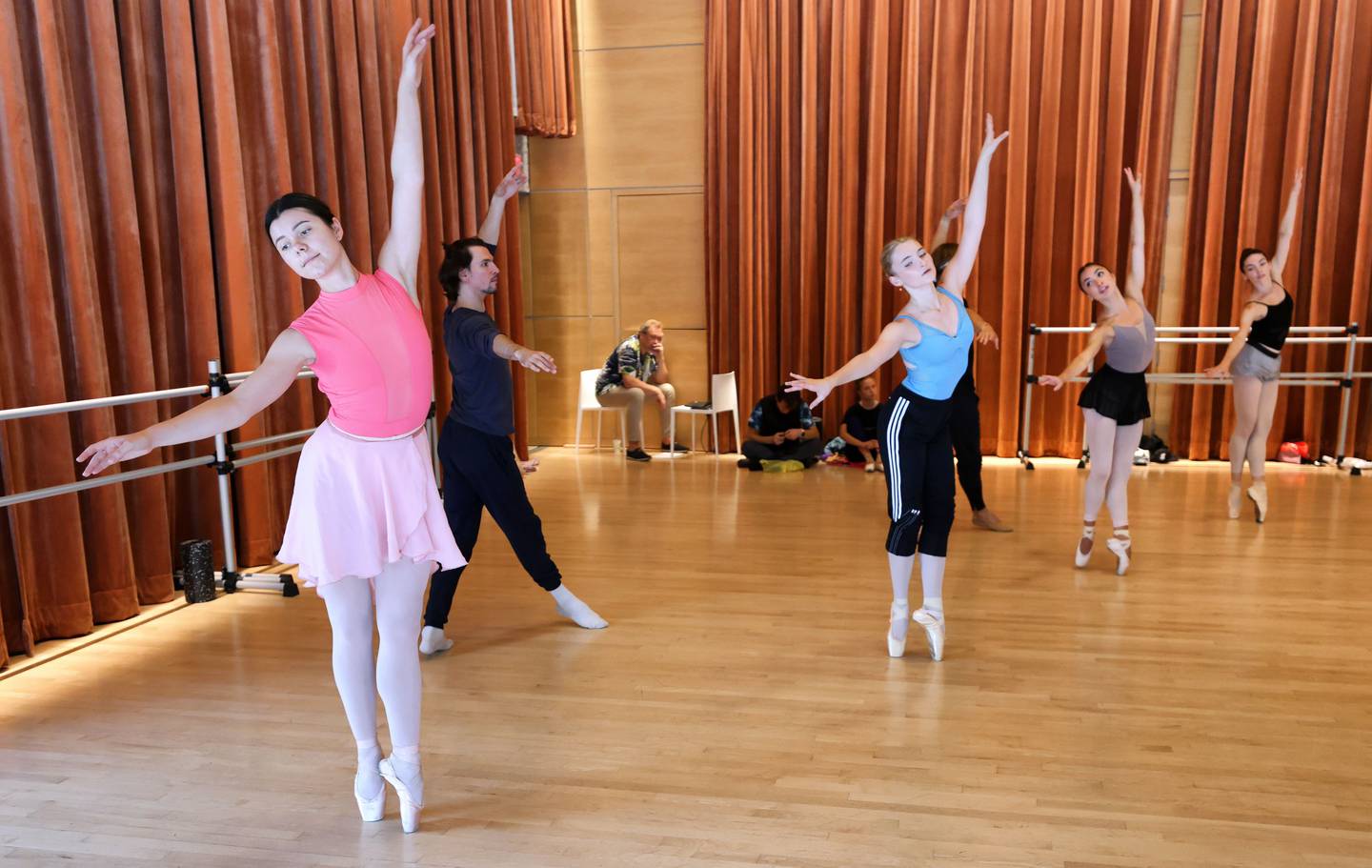 Members of the National Ballet of Ukraine, shown rehearsing at the Dr. Phillips Center for the Performing Arts in Orlando on Aug. 25, will return to Ukraine after Saturday's performance. (Joe Burbank/Orlando Sentinel)

Dancers from the acclaimed dance company also have been moved by Central Florida’s support.

“I’m having a happy time here,” said Kateryna Chupina, one of 17 visiting Ukrainians.

“It’s incredible for us: The number of people who made donations, the amount of donations,” added her colleague Mykyta Sukhorukov. “We are really thankful.”

One of those donations came from hotelier Harris Rosen, whose father’s family emigrated from Ukraine. He has housed and fed the dancers since their Aug. 15 arrival at his Rosen Hotel Centre on International Drive. The dancers visited Walt Disney World and Universal Orlando, one of the presenting sponsors, when not rehearsing.

Thursday night, they were guests of honor at a party hosted by attorney Mark NeJame. Donors mingled with the dancers over hors d’oeuvres and dessert. 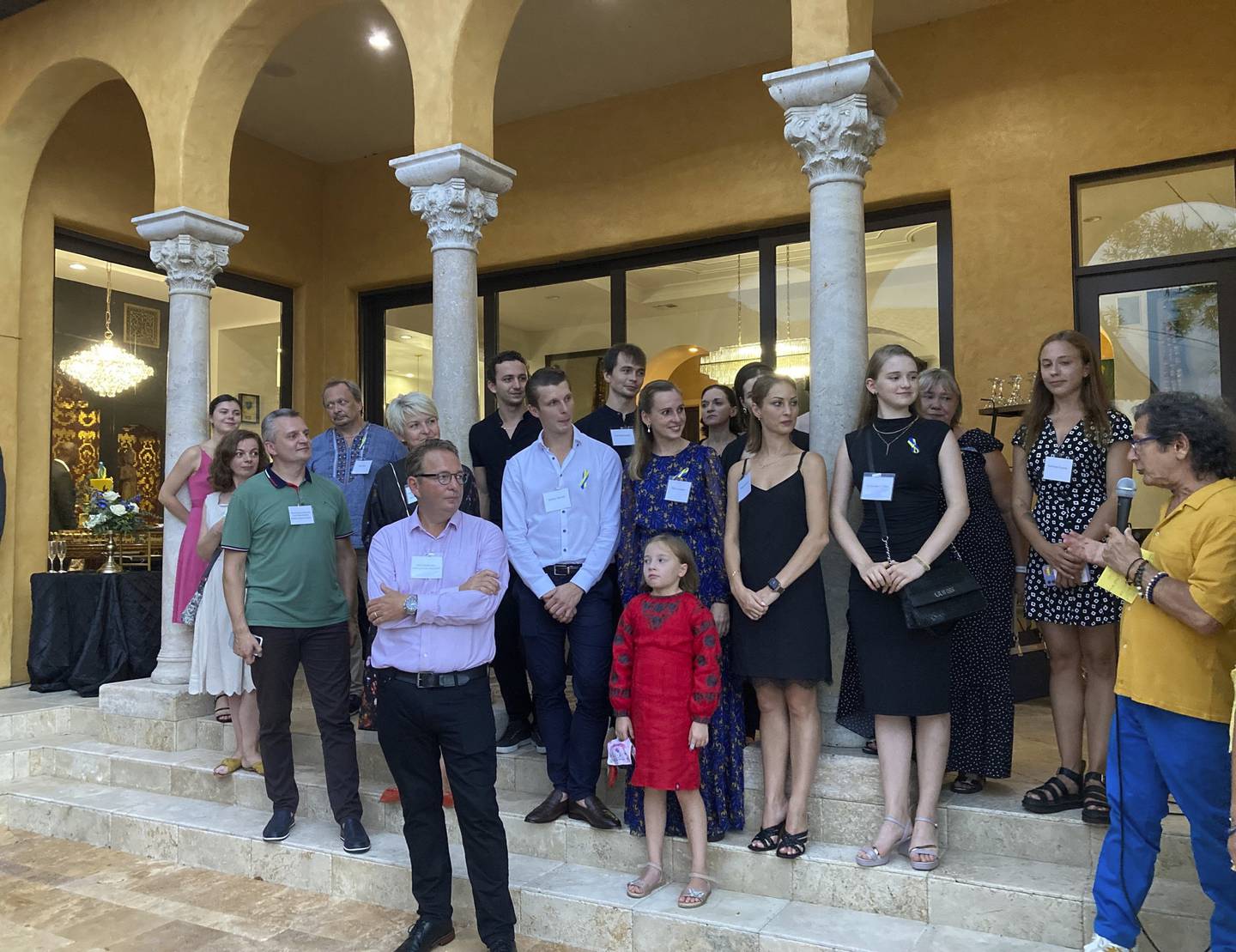 Dancers and leaders of National Ballet of Ukraine listen to Mark NeJame, at right in the Ukrainian colors of yellow and blue, during remarks at NeJame's home in Windermere on Thursday evening, Aug. 25, 2022. The dancers are in town for a benefit performance, spearheaded by Marc McMurrin (center, front). (Matthew J. Palm / Orlando Sentinel)

“Our country is divided on a lot of things,” NeJame said. “But the one thing we are not divided on is our support of Ukraine and the Ukrainian people.”

Other presenting sponsors echoed the sentiment of pitching in.

Jim Digan of Nemours Children’s Health said it took “about 3 minutes to get a yes” to supporting the event. Marty Rubin, a sponsor with Kathy Morgan, cited the resilience of his Ukrainian grandparents. McMurrin thanked the Edward E. Haddock Jr. Foundation for its financial support.

The benefit was set up so all the expenses — including $30,000 in plane fares and $10,000 in visa fees — were paid for by sponsors and donors. That way, proceeds from ticket sales and a silent auction all go directly to charity. In all, it took about $125,000 to stage the show, McMurrin said — and the Dr. Phillips Center’s contribution was critical. The center provided not only Steinmetz Hall free of charge but also technical staff and rehearsal space while handling marketing and ticketing for the event. 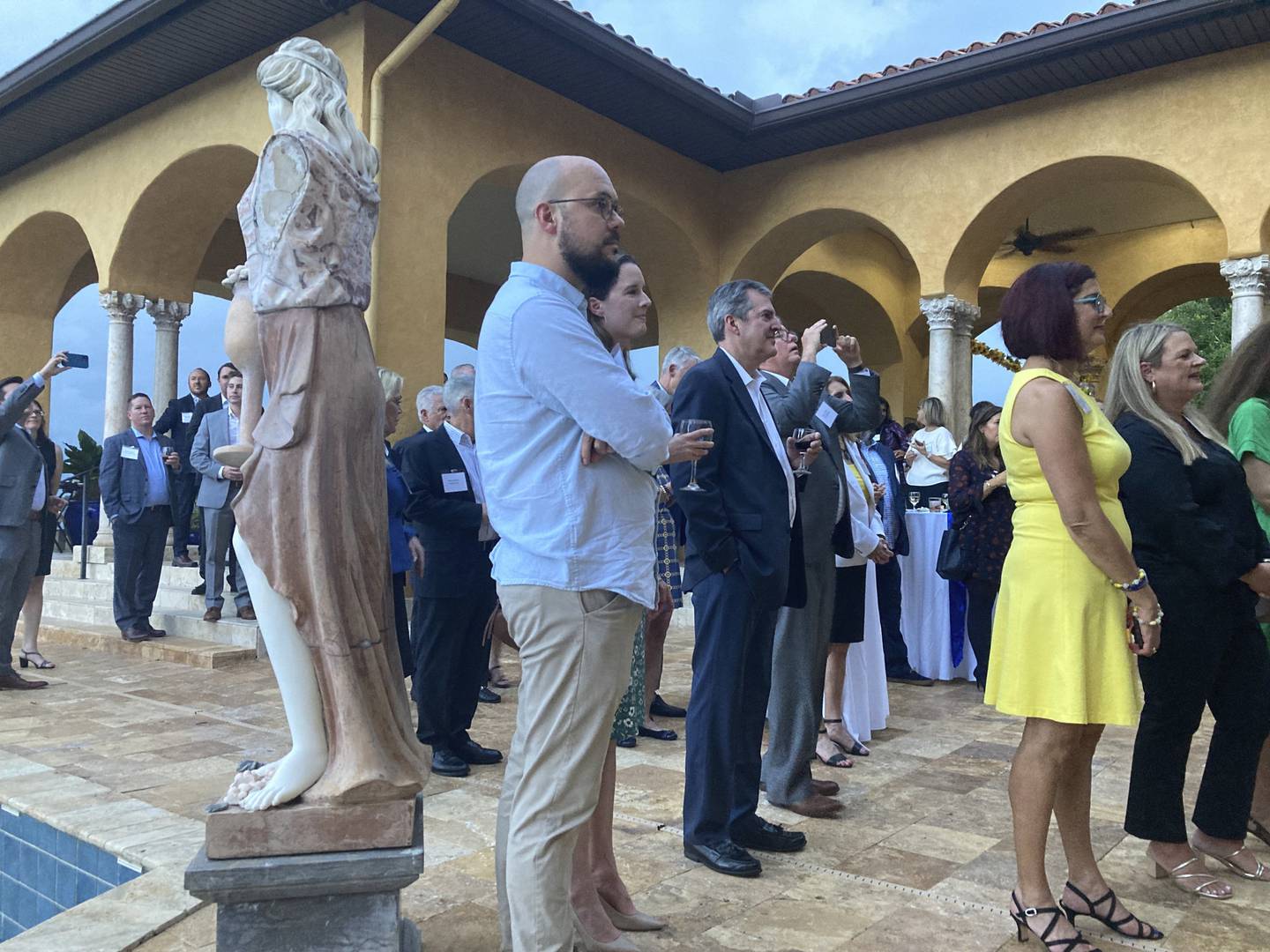 Guests at a reception honoring the visiting National Ballet of Ukraine and donors who made a benefit performance by the group possible listen to remarks at the Windermere home of attorney Mark NeJame on Thursday, Aug. 25, 2022. (Matthew J. Palm / Orlando Sentinel)

Arts center president Kathy Ramsberger “was on board from the word ‘go,’ and the board didn’t need much convincing,” said Pritchard, who proposed the idea after a conversation with McMurrin. “The cause was such an important one.”

While the program is designed to help Ukrainians, it also will show them a piece of Orlando. The show will be recorded, thanks to help from Full Sail University in Winter Park, and will be broadcast on Ukrainian’s state TV station.

“That part of it is important, too,” Pritchard said. “They will see Orlando’s culture, they will see Steinmetz Hall.”

Locally, more than 1,000 Orange County Public Schools students will see a special field-trip performance and be able to ask questions of the Ukrainian visitors. 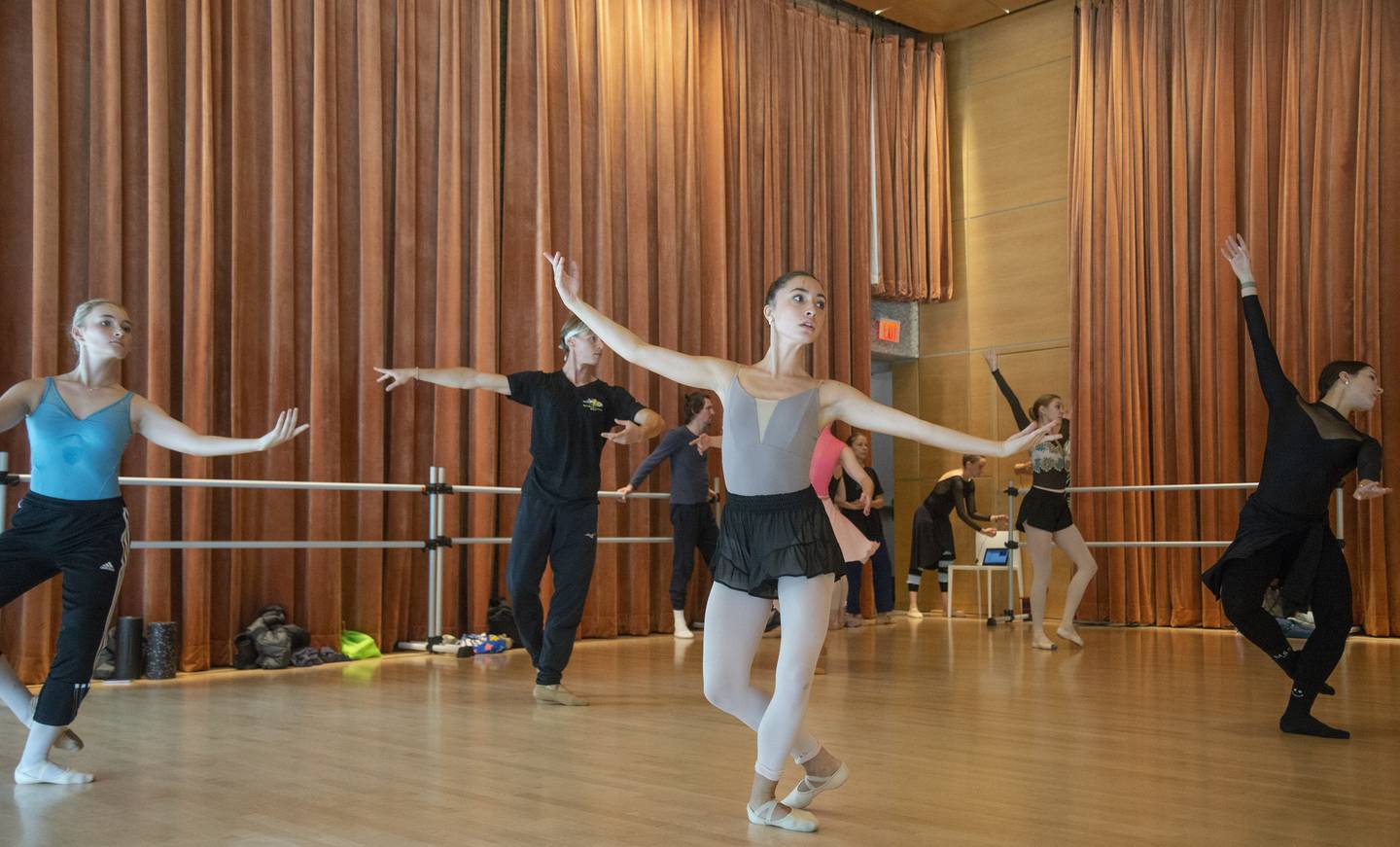 “We always try to give an opportunity to schoolchildren,” Pritchard said. “That’s the educational component.”

And Central Floridians can see a short exhibition by the dancers and hear their firsthand perspective on how war has affected Ukrainian artists at a special free discussion program at the University of Central Florida’s Pegasus Ballroom at 6 p.m. Aug. 29.

McMurrin didn’t anticipate the field trips and TV and other hoopla when he first thought to do something to aid the war effort. He grew up in Winter Park but has a personal connection to Ukraine: His parents lived there for 25 years.

His father, a conductor, had first visited Ukraine in the early 1990s — introducing glorious religious music like Handel’s “Messiah” that had been banned under decades of secular communism.

The emotional reaction by the Ukrainians “touched my parents so deeply,” McMurrin said, that they moved there permanently in 1993 and established a charitable foundation called Music Mission Kiev. After his father became conductor of the Kyiv Symphony Orchestra, McMurrin organized their tours. He last visited Ukraine in 2016. 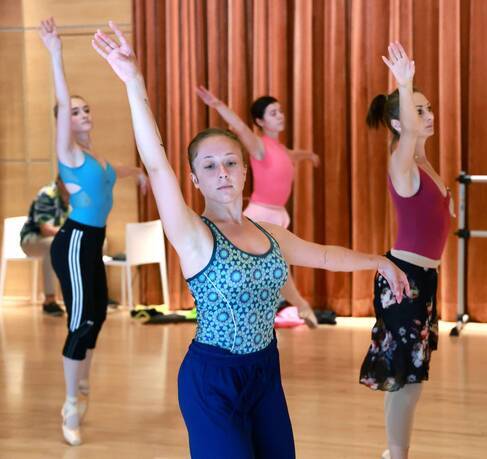 Members of the National Ballet of Ukraine rehearse backstage at the Dr. Phillips Center for the Performing Arts in Orlando, Thursday, Aug. 25, 2022. The dancers will perform in a sold-out benefit for Ukrainian charities on Saturday night. (Joe Burbank/Orlando Sentinel)

As he started thinking about the ballet benefit, McMurrin knew that to be worthwhile, the event would have to raise at least half a million dollars — a goal now well within reach after the silent auction concludes. “Will we hit that mark?” McMurrin said. “For sure.”

The three charities receiving the proceeds include Razom, which means “together” in Ukrainian. The organization supplies medical supplies to hospitals and first-aid kits with lifesaving tourniquets to front-line fighters. UNICEF, which focuses on children’s issues, also will receive funding, as will the Euro-Asian Jewish Conference, which is assisting refugees with bedding, clothing, food and shelter.

McMurrin got the project going by turning to his boss, Ginsberg, who quickly gave the OK. He began collaborating with Ukrainian choreographer Vadim Fedotov.

“Over coffee on a scrap of paper we came up with a plan,” he said.

Fedotov died unexpectedly in June, but his choreography lives on and will be represented in Saturday’s show. 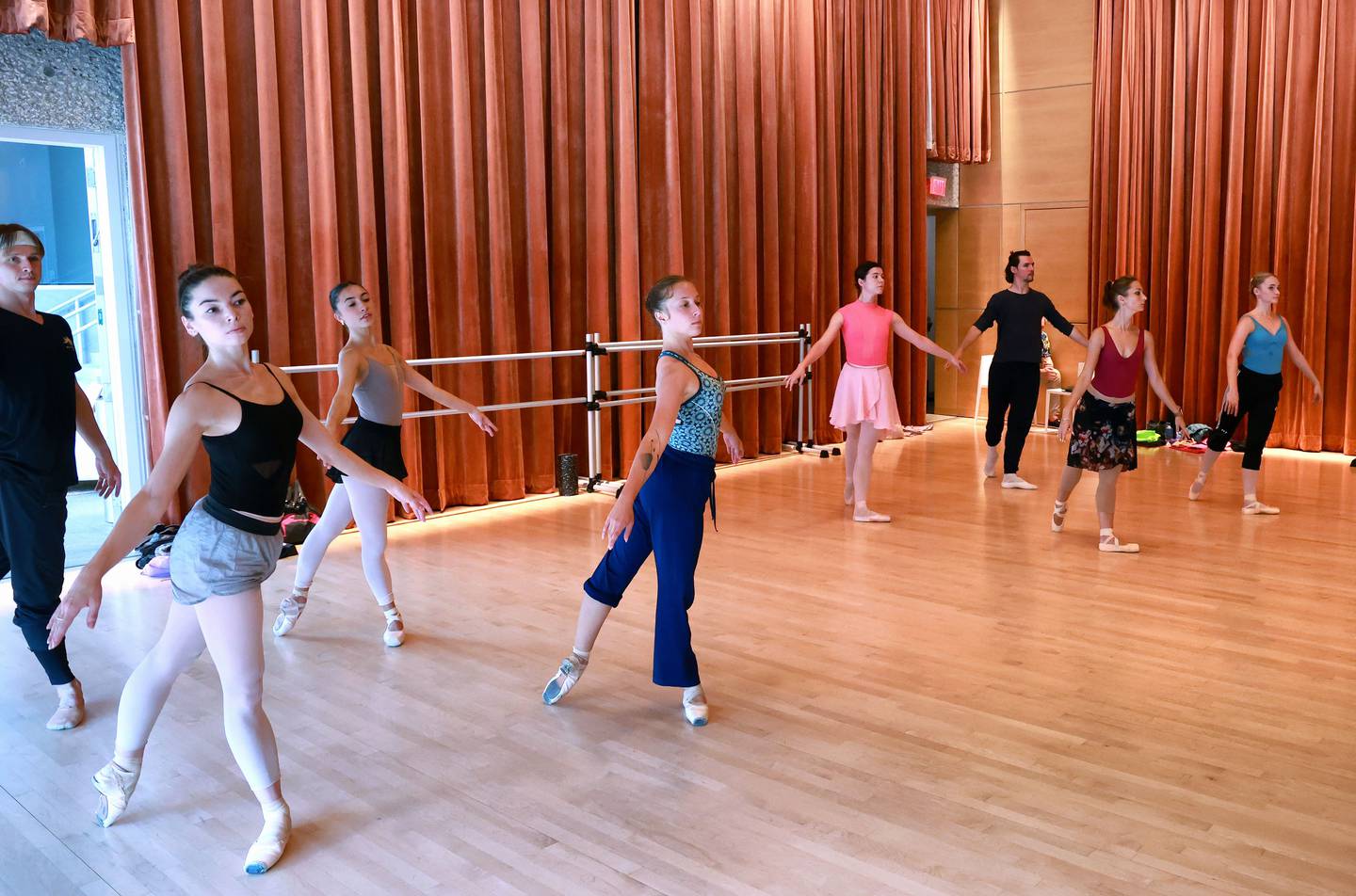 Members of the National Ballet of Ukraine rehearse backstage at the Dr. Phillips Center for the Performing Arts in Orlando, Thursday, Aug. 25, 2022. The dancers will perform in a sold-out benefit for Ukrainian charities on Saturday night. (Joe Burbank/Orlando Sentinel)

The performance will include excerpts from famous ballets such as “Le Corsaire,” “Giselle” and “Don Quixote.” But it also will include somber moments, including the “Lacrimosa” from Mozart’s Requiem and Mykola Lysenko’s “Prayer for Ukraine.”

Chupina and Sukhorukov, who both have family in Kyiv, say the dancers are eager to display their art, including the national folk dance called the hopak.

They say the emotion generated by the occasion will strengthen rather than hinder them.

“This is our work,” said Sukhorukov. “Our performances are to support Ukraine in any way.”

“We are Ukrainians,” added Chupina. “We are very strong.”