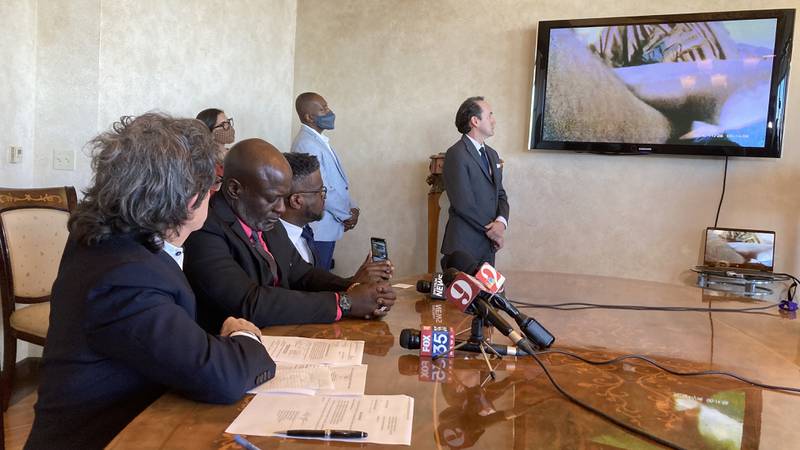 Jason Friend (second from the left) looked away as his lawyers showed reporters body camera video of his 2019 arrest on Wednesday, Feb. 10, 2022. Friend is suing the City of Apopka over the violent arrest. (Cristóbal Reyes)

Before Apopka police officers violently arrested Jason Friend outside of his home the night before Thanksgiving 2019, they spoke to his neighbor, who called them because Friend was loudly listening to his music in his car while parked in the driveway in front of his home.

“I know him. He’s a very nice guy. He’s a former New Jersey cop, I believe‚” said the neighbor, who asked police to check on Friend after he appeared “incoherent” inside the car. “His mother passed away a couple months ago, that’s what he’s blaming this on.”

The interaction, captured by an officer’s body-worn camera and released by Friend’s lawyers Thursday, happened just minutes before cops ripped Friend out of the car, beating him and using a Taser on him for nearly a minute while trying to handcuff him.

Nathaniel Tuck, an arresting officer who before the takedown aimed his Taser at Friend as he sat in his car, wrote in a report that Friend punched him in the face during the scuffle.

Whether that happened is unclear in the video.

Friend, a former cop who served in the U.S. Army, looked away as reporters watched the footage inside a conference room at the downtown Orlando office of NeJame Law, the firm representing him in a lawsuit against the City of Apopka and Orange County. He said he didn’t remember what happened that night until he was shown video by a neighbor.

Police described Friend as “heavily intoxicated” at the time of the arrest, which Friend and his lawyers deny. Rather, Friend said, he was “zoned out.”

“I was unaware of the whole event until I’m laying on the ground bleeding, face swelling up and I can’t see out of my eyes. Struggling to breathe because the guy cracked my ribs,” said Friend, who said he suffers from post-traumatic stress disorder.

He said there was no reason for officers to pull him from his car when no one was in danger or had been harmed.

The lawsuit alleges brutality by APD and the Orange County Jail and also takes aim at APD’s hiring and retention practices, citing Tuck’s reported affiliation with the Proud Boys, a right-wing extremist organization implicated in the attempted insurrection at the U.S. Capitol on Jan. 6, 2021.

Tuck was also charged by federal prosecutors last year with invading the complex alongside his father, ex-Windermere cop Kevin Tuck, and members of the Proud Boys, including Arthur Jackman, the husband of an Orange County deputy sheriff and local chapter vice president.

The City of Apopka declined to comment on the arrest due to pending litigation. When the Orlando Sentinel and other news outlets submitted public record requests for the video, the agency quoted the outlets $1,164 to review and produce it.

“The Proud Boys is a fascist organization ... and yet this person was allowed to be on the Apopka police force. Why?” said Mark NeJame, one of Friend’s lawyers. “How could such a person be permitted to be on the force?”

“You don’t allow this type of person to be responsible for the public,” he added.

Friend’s lawsuit, which was filed last November, attracted news coverage after cellphone video taken by neighbors resurfaced on TikTok recently. The videos show neighbors, who called police to complain about Friend loudly listening to music in his car, which was parked in the driveway of his home, begging officers to stop as they repeatedly punched and used a Taser on him.

“Shut the [expletive] up,” an officer, which video released Thursday confirms was Nathaniel Tuck, can be heard saying.

Tuck, who resigned from APD nearly a year before he was arrested for participating in the attempted insurrection, has not been publicly confirmed by federal prosecutors to be an active member of the Proud Boys.

But according to chat logs published by Creative Loafing Tampa Bay, he signed up as a member around July 2019, while still a cop, after being radicalized by right-wing YouTube videos.

“I watched hours of antifa videos which then led me to Gavin videos,” Tuck told Jackman, referring to Proud Boys founder Gavin McInnes. “He spoke the truth. Which sparked my interest.”

Along with the allegations against APD, Friend’s lawyers claim corrections officers at the Orange County Jail “subjected [Friend] to abuse including the use of racial slurs” and physical violence. A jail spokesperson declined to comment on the allegations.

Friend was charged with resisting arrest without violence and three counts of battery on a law enforcement officer, which have all since been dropped.

“I grew up without my father, so all I ever had was my mom and I’m the oldest of three sons,” Friend said. “Excuse me for grieving.”