(CNN) A Florida deputy and a suspect are facing charges in relation to a botched arrest earlier this year in which an explosion allegedly set off by a Taser left the suspect with burns over much of his body, Osceola County officials announced Thursday.

As Osceola County deputies were attempting to arrest Jean Barreto, 26, at a gas station on February 27, an explosion erupted which burned 75% of Baretto's body and injured several of the deputies, according to Osceola County Sheriff Marcos Lopez.

Deputy David Crawford is charged with misdemeanor culpable negligence after he discharged a Taser near gasoline before the explosion, Lopez said at a news conference.

"Deputy Crawford was aware there was gas in the direct and immediate area," Lopez said. "We know this because he says on bodycam, 'kill the pump, kill the pump, gas!'"

Crawford picked up a Taser that had been discarded by another officer, Lopez said, and "with the Taser in his hand, the fire ignites. According to the Taser log, there was a trigger pulled that coincides with the timing." 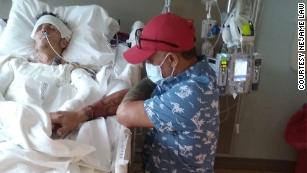 26-year-old Jean Barreto in the hospital following an explosion that left him with burns over much of his body.

CNN has been unable to confirm if Crawford has an attorney at this time.

In a press conference on Wednesday, Mark NeJame, an attorney for Barreto, called the actions of the deputy "egregious." He said, "An elementary school child knows you don't deploy electricity or anything that's flammable around gasoline."

Barreto, who has been hospitalized since the day of the incident, is also facing a number of charges, including fleeing and attempting to elude law enforcement, reckless driving and resisting an officer without violence, Lopez said.

Deputies were attempting to arrest Barreto because he matched the description of a suspect who was reportedly brandishing a gun and committing traffic violations with a group of people on dirt bikes, Lopez said. Law enforcement helicopter footage played during the sheriff's news conference showed a group of people on dirt bikes that were, at various times, passing cars inside lanes, popping wheelies and riding on sidewalks.

How the botched arrest unfolded

In surveillance footage from the Wawa gas station in Orange County where the incident occurred, Barreto is seen pulling in to fill the gas tank of his dirt bike.

Moments later, Crawford sprints into view from the right side of the screen and tackles Barreto from behind, knocking over the bike and -- according to Barreto's attorneys -- causing gas to spill from the pump. At least three Osceola County Sheriff's vehicles surrounded the pump.

As more deputies approached, an explosion occurs near the bike, the surveillance video from the gas station showed.

According to the report from the Bureau of Fire, Arson, and Explosives Investigations (BFAEI), provided by Barreto's attorneys, "the most probable cause of the fire was an electric discharge from the deputies deploying a department-issued taser device." During the press conference, Lopez confirmed this was the cause.

CNN has reached out to the Division of Investigative & Forensic Services, which oversees the BFAEI, to obtain a copy of the report and has not received a response.

Another attorney for Barreto, Albert Yonfa, said based on transcripts of logs from that night, deputies requested medical assistance for two officers burned on-scene, but not for Barreto.

"They had Jean Barreto in handcuffs, skin filleted on the ground, and never called 911 about him," he said. "It was the EMS on the scene that called for a third vehicle to assist Jean."

The OCSO has not responded to these specific allegations, but during the press conference, Lopez stated that Barreto received assistance immediately after his body was "engulfed by flames."

Another deputy on the scene "immediately grabs a fire extinguisher and immediately goes to the suspect," the sheriff said. "The fire on the suspect is put out prior to putting the fire out on deputy Crawford."

As to why Osceola County deputies were attempting an arrest in Orange County, Lopez cited the fresh pursuit doctrine, which allows law enforcement to follow and apprehend a suspect in a different county if they notify law enforcement in that county.

What's next for the deputy and suspect

Sheriff Lopez said that despite charges being filed, arrests will not be made on Crawford or Barreto while they recover from their injuries.

The firearm reportedly being brandished by Barreto has never been located, according to the sheriff.

Following the news conference Thursday, Barreto's attorneys issued a statement saying, in part, "While we are gratified to know that some criminal charge is being recommended against the Deputy, it will be up to the Office of the State Attorney to determine if the charges against the Deputy are sufficient as to his crime or should be greater since the Sheriff has now admitted culpability and the actions are so apparent and egregious."

"We await the independent review as to the full charges to be considered against the deputies involved, not just the one charge announced today," the attorneys went on to say.

NeJame confirmed to CNN that he does plan to file a damages suit against OCSO on behalf of Barreto.

CNN has reached out to the Osceola County Sheriff's Office to obtain more information, body-worn camera footage, surveillance footage, and for comment on the case and has not received a response.