May 18, 2022
By Cristóbal Reyes and Amanda Rabines | Orlando Sentinel

Lawyers representing a man severely burned in a fire at a Wawa in February while being arrested by Osceola County deputy sheriffs called on the Florida Department of Law Enforcement and the U.S. Department of Justice to investigate, after state authorities found the deputy’s Taser sparked the blaze.

Jean Barretto, 26, has been in the hospital for nearly three months after suffering extreme burns on 76% of his body he sustained Feb. 27 while pumping gas in his dirt bike. Surveillance video released by the Osceola County Sheriff’s Office shows Barretto and a deputy set ablaze just seconds after the man was tackled to the ground.

A state fire marshal report released last week placed the blame on an unnamed deputy who used a stun gun on Barretto, who was covered in gasoline, starting the fire. Agency policy obtained by the Orlando Sentinel forbids deputies from using stun guns if a suspect “could possibly be seriously injured by secondary factors,” including flammable substances.

The deputies involved were identified in the report as David Crawford, Christopher Koffinas and Benjamin Maclean, but it did not say who fired the stun gun.

Currently, the Sheriff’s Office is investigating the incident. Sheriff Marcos López, who is scheduled to comment on the incident at 4 p.m. Thursday, has also been criticized in recent weeks for his handling of a deadly shooting at a Target parking lot by deputies in unmarked vehicles who were attempting to arrest alleged shoplifters.

Barretto has not been charged with a crime.

“I’ve never seen law enforcement behaving this way in Central Florida and doing these types of things for anything from no offense to misdemeanor offenses,” said Mark NeJame, who with Albert Yonfa represent Barretto and the family of the man killed at Target. “This is insanity, and we have to put an end to it.”

Initially, the Sheriff’s Office said deputies were following Barretto after responding to a call about a group of bikers allegedly brandishing guns. NeJame told reporters Wednesday that Barretto was unarmed and does not have a criminal history.

The day of the fire, Barretto had joined a group of bikers on a 19-mile ride in Orange County in honor of a friend who died when they briefly crossed into Osceola County, his lawyers said. On his way home, he stopped at a Wawa on the northeast corner of John Young Parkway and Central Florida Parkway when a deputy tackled him from behind.

It’s unclear whether deputies announced themselves before the arrest.

NeJame said records have not been shared with him to show what led deputies to follow Barretto into Orange County. No other video has been released by the Sheriff’s Office. Requests by the Sentinel for reports and agency footage of the incident have been unfulfilled for nearly two months. 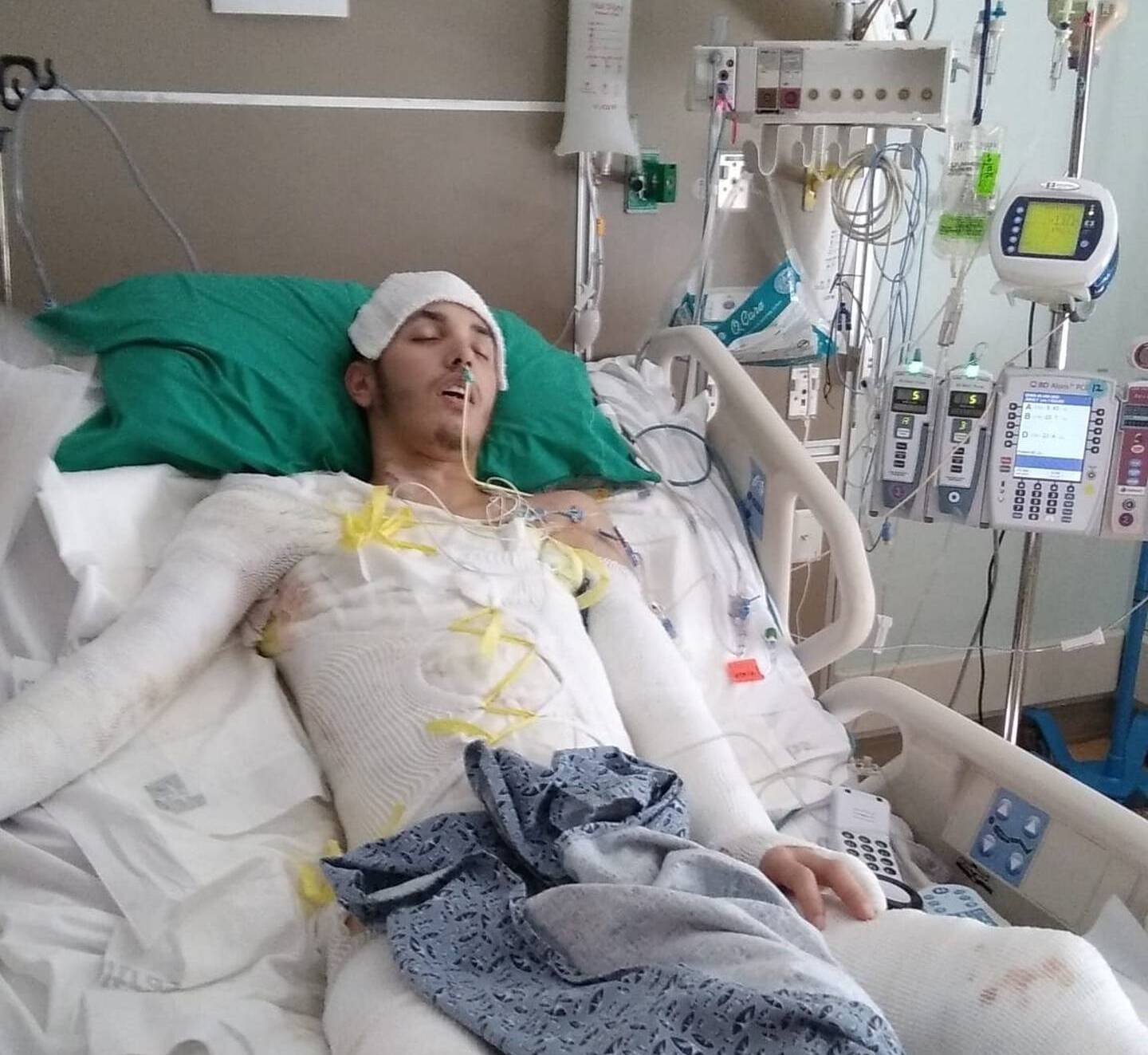 A press release issued Tuesday called for the DOJ to investigate the Sheriff’s Office’s protocols, practices, policies, and procedures.

The lawyers pointed to a “zero-tolerance policy” López touted on social media video posted Aug. 5 in which he is seen helping chase down motorcyclists as part of a “special operation” enforcing traffic laws.

After 10 weeks in the hospital, Barretto is still undergoing intense treatment to stay alive, including procedures that require his dead skin to be routinely peeled off of his body. Graphic images shared by NeJame offered a view into the hourslong process of changing the dressings covering most of Barretto’s body.

Barretto’s family, which Yonfa described as “tight-knit,” have been staying with him as he receives treatment. A photo shared with reporters shows his father praying at his bedside, which Yonfa said he does everyday.

The 26-year-old will be placed in a medically induced coma ahead of a new treatment at Orlando Health, which has been growing skin tissue to begin grafting, his lawyers said.

NeJame and Yonfa also represent the family of Jayden Baez, 20, who was killed in a Target parking lot last month by deputies in unmarked vehicles as they boxed in his car to stop two alleged shoplifters.

Joseph Lowe and Michael Gómez, accused of stealing $46.16 worth of pizza and Pokémon cards, were shot multiple times, leading to Lowe losing one of his fingers.

Like with the shooting, in which video shows deputies not flashing their lights until Baez tried driving away, Barretto claims he didn’t know he was tackled by law enforcement.

That shooting is being investigated by FDLE while the Sheriff’s Office investigates the fire. López declined to speak on the matter for nearly two weeks as news of the shooting unfolded, falsely claiming the state probe kept him from releasing initial details.

NeJame accused López of hiding “behind the skirt of FDLE” while still remaining silent about what happened to Barretto.

“Rather than turning [the fire investigation] over to an independent agency, he’s got the fox guarding the henhouse,” NeJame said. “Why is this being investigated with no information being provided to us when it’s his own agency? He can’t have it both ways.”